What private and secure home security camera options exist, does one exist at all?

Is there an actual, simple, private, secure outdoor home security camera or doorbell camera? I knew finding one would be more difficult than buying a Nest, but I never thought it would be impossible.

Every time I think I find something, it won’t work. Eufy was my first choice, but that plan died for the obvious reasons. Then I looked to build something, but that became more complicated and expensive (thousands of dollars) than it needs to be for what really is a simple doorbell camera, and it still had security problems.

I found UCam, a “blockchain camera” which had good reports when it was first released, and is still around. UCam is cheap, but it is only an indoor camera. Even if I could put it in a weather resistant case, it won’t withstand the temperatures outside.

Has anyone used UCam anyway?

Am I really out of luck and what I want does not exist? I know there will be tradeoffs and I can’t have everything at the perfect price, but right now I am coming up with almost nothing. 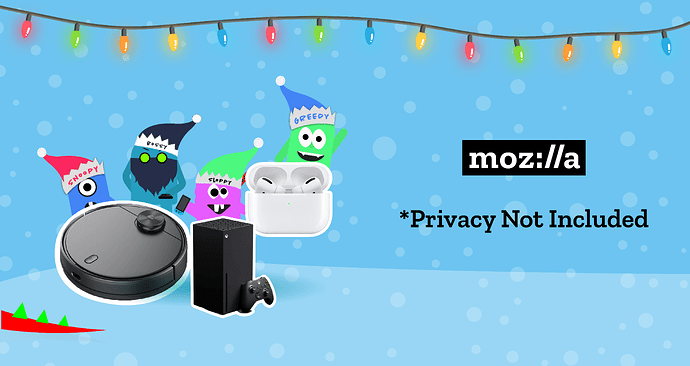 *Privacy Not Included: A Buyer’s Guide for Connected Products

Be Smart. Shop Safe. How creepy is that smart speaker, that fitness tracker, those wireless headphones? We created this guide to help you shop for safe, secure connected products.

What you are saying is that there is nothing that will do what I want and meet my requirements for privacy and security. Is that right?

Honestly I don’t know, it depends on your threat model and what you are trying to protect with the cameras. I don’t have any experience in home surveillance but maybe confining your IOTs behind a firewall could help? I don’t know, it seems quite tricky to set up an entire system if you want to have total control.

I found UCam, a “blockchain camera” which had good reports when it was first released, and is still around.

Has anyone used UCam anyway?

Probably not, I opted to go with Ubiquti and a UNVR, because their software is pretty good.

For a cheaper option, you could get some camera that supports the ONVIF standard and use it with your own NVR.

There’s a lot around, I’d probably start with Motion or Shinobi or possibly Kerberos

Also this review thread. This page also lists a number of solutions, though I haven’t personally used any of them.

Thanks for the reply.

I looked into the Ubiquti and a UNVR a while ago, but I need simple and that system does a lot more than I need. Take that it has a lot of extra features and combine that with the high price, and it cost too much to justify for this project.

I checked out those links and there are some possible options, especially if I keep the system behind my firewall. But looking at the other options in those links, I think my choices might be to buy Ubiquti/UNVR for about $1,000 or to build my own solution to “save money” and have it cost $2,500.