I saw someone talking about a lack of cloud storage options by Privacy Guides and came upon Icedrive.

Again, I’m just a layperson. If anyone wants to do some proper digging on Icedrive, it’d be appreciated if you could add your insight here.

Most - if not all, encrypted cloud storage services use the AES algorithm - The encryption algorithm endorsed and promoted by surveillance agencies. If you wanted to lose weight, would you get diet advice from McDonalds?

Icedrive is the only encrypted cloud storage solution to use the bulletproof twofish algorithm. Widely accepted by cryptographers as a more secure solution than AES/Rijndael.

They also use quotes from prominent figures praising privacy and security in a very general way; perhaps in an attempt to make it seem like the quotes are referring to the service itself? perhaps to merely educate viewers? I don’t know their intention, but it could be argued as irresponsible marketing. 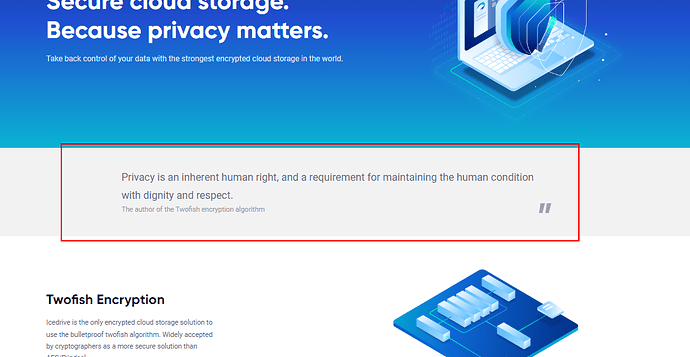 Have they had third party audits?

The issue with a lot of these encrypted storage things, is that they could have serious vulnerabilities, or just substitute the javascript served to your browser to send off your keys.

I’m immediately skeptical of a site that has random Edward Snowden quotes. Seems like terrible marketing and that alone is a reason we often use for not recommending products.

I haven’t taken an in-depth look at it, but from a quick glimpse and first impressions, it seems pretty obscure and their marketing feels really cheesy and amateurish.

I would not trust a party with sensitive data like emails and file storage unless they’re a big or well known and reputable company. I’m getting CTemplar vibes.